People are cloaked behind masks and confined to their homes to avoid a deadly pandemic. The US economy is in sweeping decline. Dark conspiracy theories about a virus as a form of bioterrorism are spiraling out of control. The Income inequality has left cities like Los Angeles with billionaires living in $100-million homes while tens of thousands of homeless people sprawled out in Dickensian scene on the sidewalks. Protesters of racial injustice have taken to the streets across the U.S. and elsewhere, often coming into conflict with police and government troops the likes of which have not been seen since the 60’s.

The US government is under the spell of rich and irresponsible TV reality show stars with authoritarian egos and is in over its head. Congress is dysfunctional and the people its members represent are deeply polarized, echoing the seeds of borderline Communism. Elements of the left and the right are meeting at protests around the country and turning increasingly to guns and other forms of violence. Police fire tear gas and swing clubs. The president, instead of standing for unity, threatens to send federal troops into “Democrat-run” cities.

At the same time, the country is being slammed by record-setting hurricanes, burned by wildfires, imperiled by rising oceans and invaded by disease-carrying mosquitoes that could never live in our climate before and at last – bring on the murder hornets.

While the world was in turmoil, John D’Antonio chronicled his interpretation of the history making events as they unfolded, in his series of paintings entitled the “Dystopia 2020.” 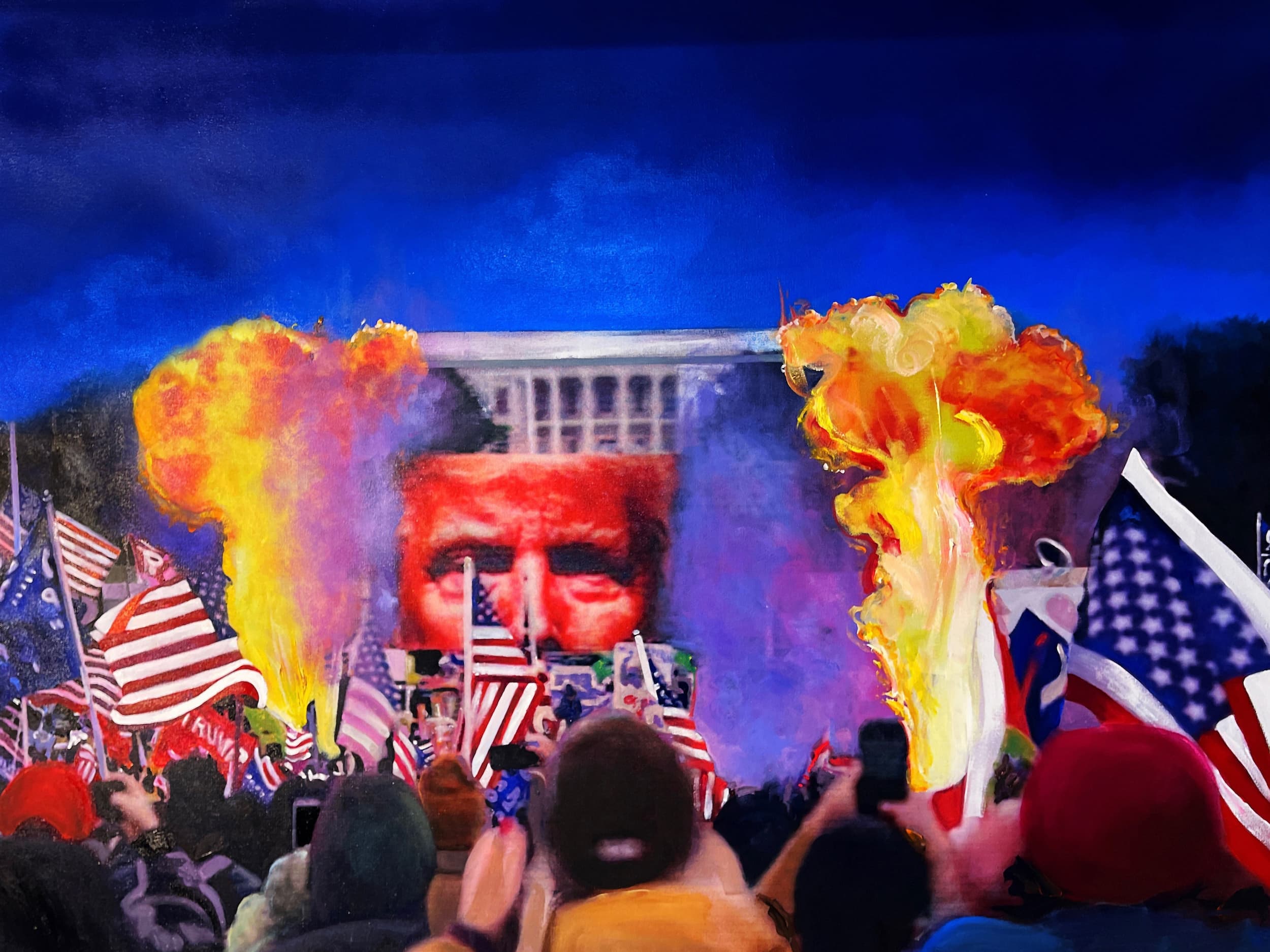 "The Wizard of Oz" quickly became a trending topic on Twitter as users compared the phrase “in my great and unmatched wisdom” to the movie’s “great and powerful Oz.” This painting takes that statement a step further. On January 6, 2021, a mob of Trump supporters attacked the US Capitol to overturn his defeat in the 2020 presidential election and support his “false” claim that the 2020 election had been "stolen by emboldened radical-left Democrats". The Capitol Complex was locked down and lawmakers and staff were evacuated, while rioters assaulted law enforcement officers, vandalized property, and occupied the building for several hours. “Pay no attention to the man behind the curtain. I am the great and powerful Oz.” 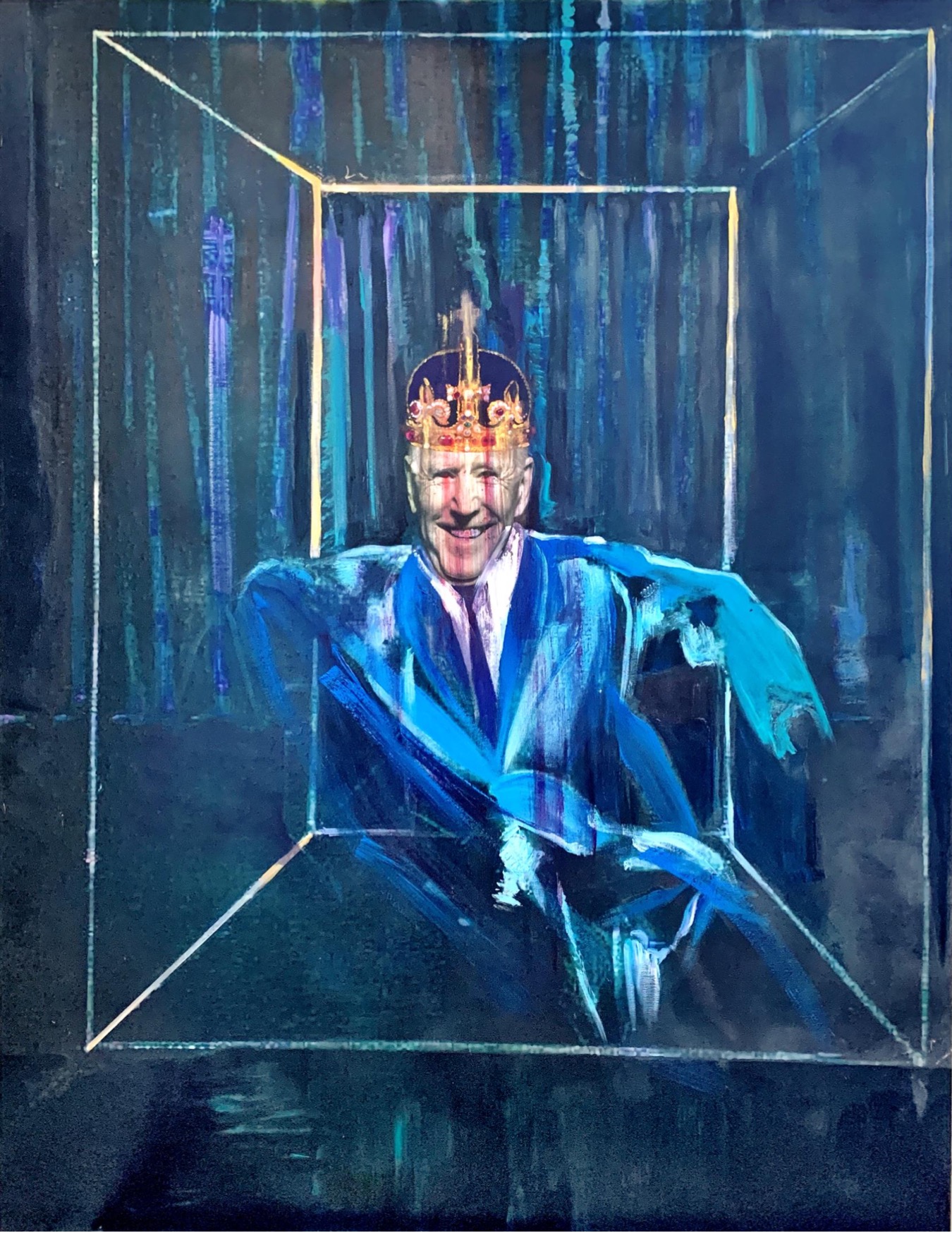 Tragic Biden is trapped in an orange abstract box. ...another adaptation from Francis Bacon’s early work where if we look more carefully, we can find that he maintains his sarcastic smile despite being handless – out of control. Now that the Democrat's have had their way, he has “earned his crown”. 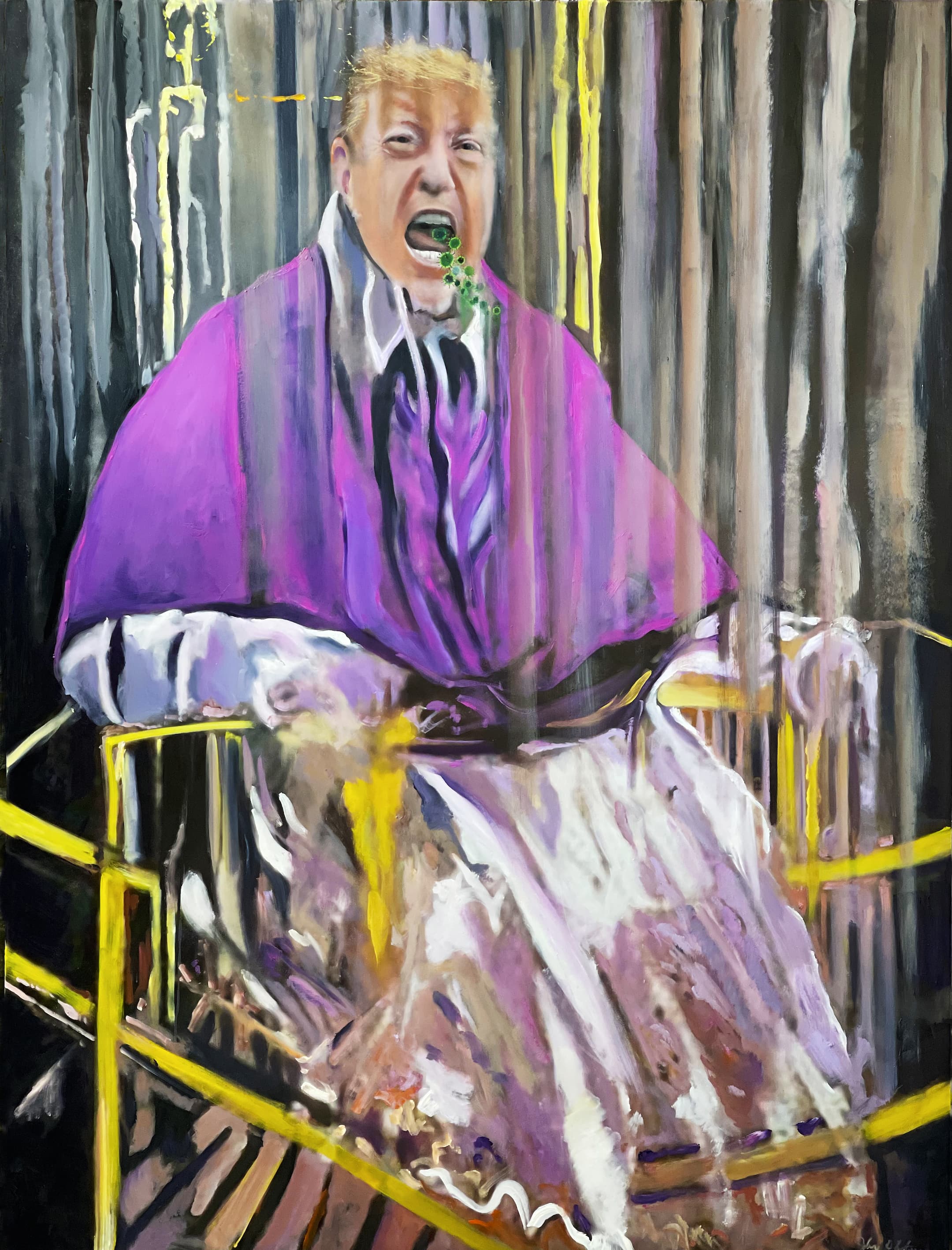 A raw, dark and visceral adaptation of Francis Bacon’s Screaming Pope and disquieting from the outset. Donald Trump’s pious attitude is captured as he spews Coronavirus in this sacrilegious portrait. Ironically, this painting was in process at the same time he became ill with the virus. 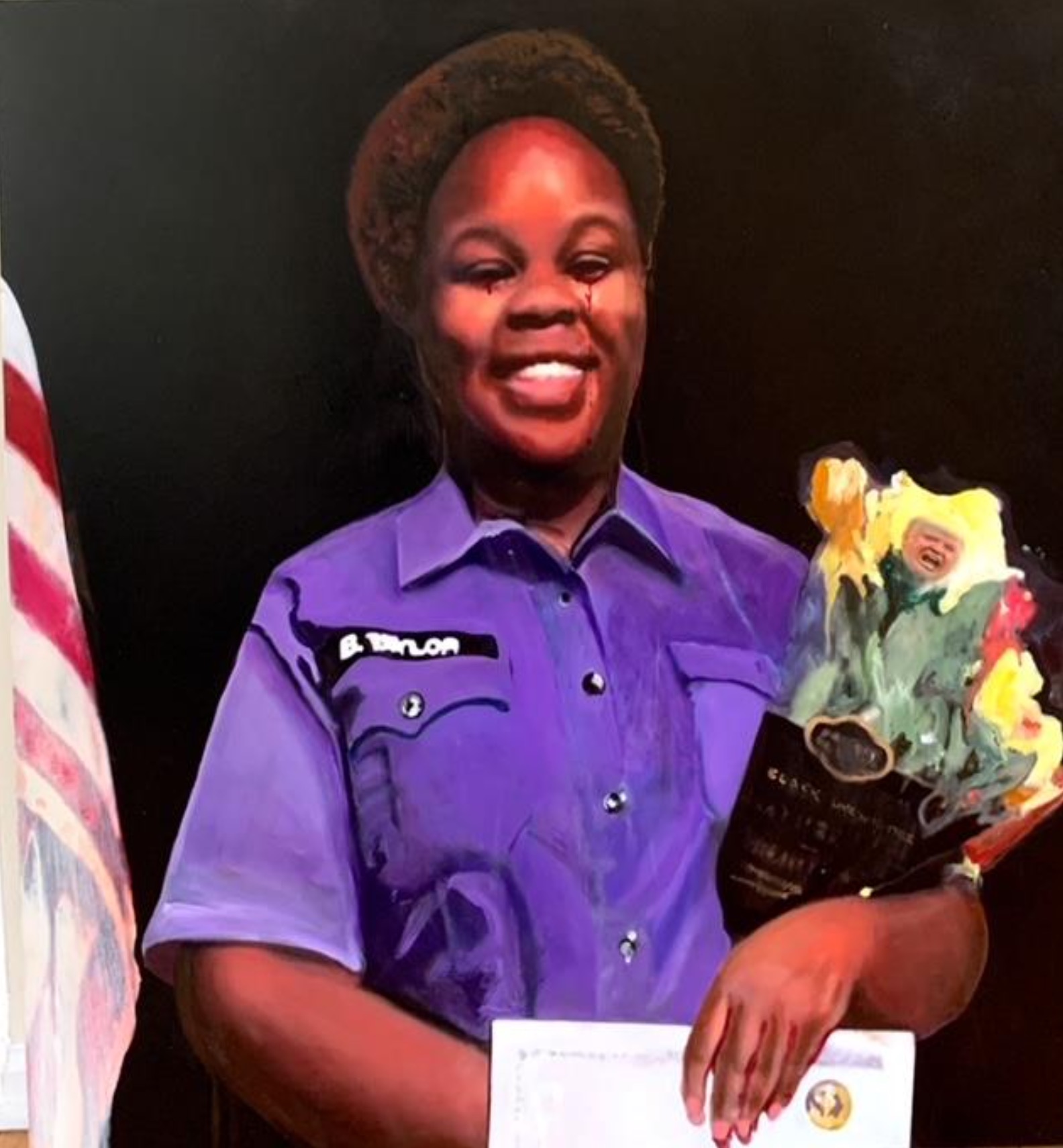 Tears of blood and dressed in purple, the color of sorrow, 26-year-old African-American Brionna Taylor, was fatally shot in her bed next to her drug dealing boyfriend in Louisville, Kentucky on March 13, 2020, when white plainclothes officers forced entry. The shooting of Taylor by police officers led to numerous protests that added even more fuel to those across the United States against police brutality and racism. When a grand jury did not indict the officers for her death, further civil unrest ensued. 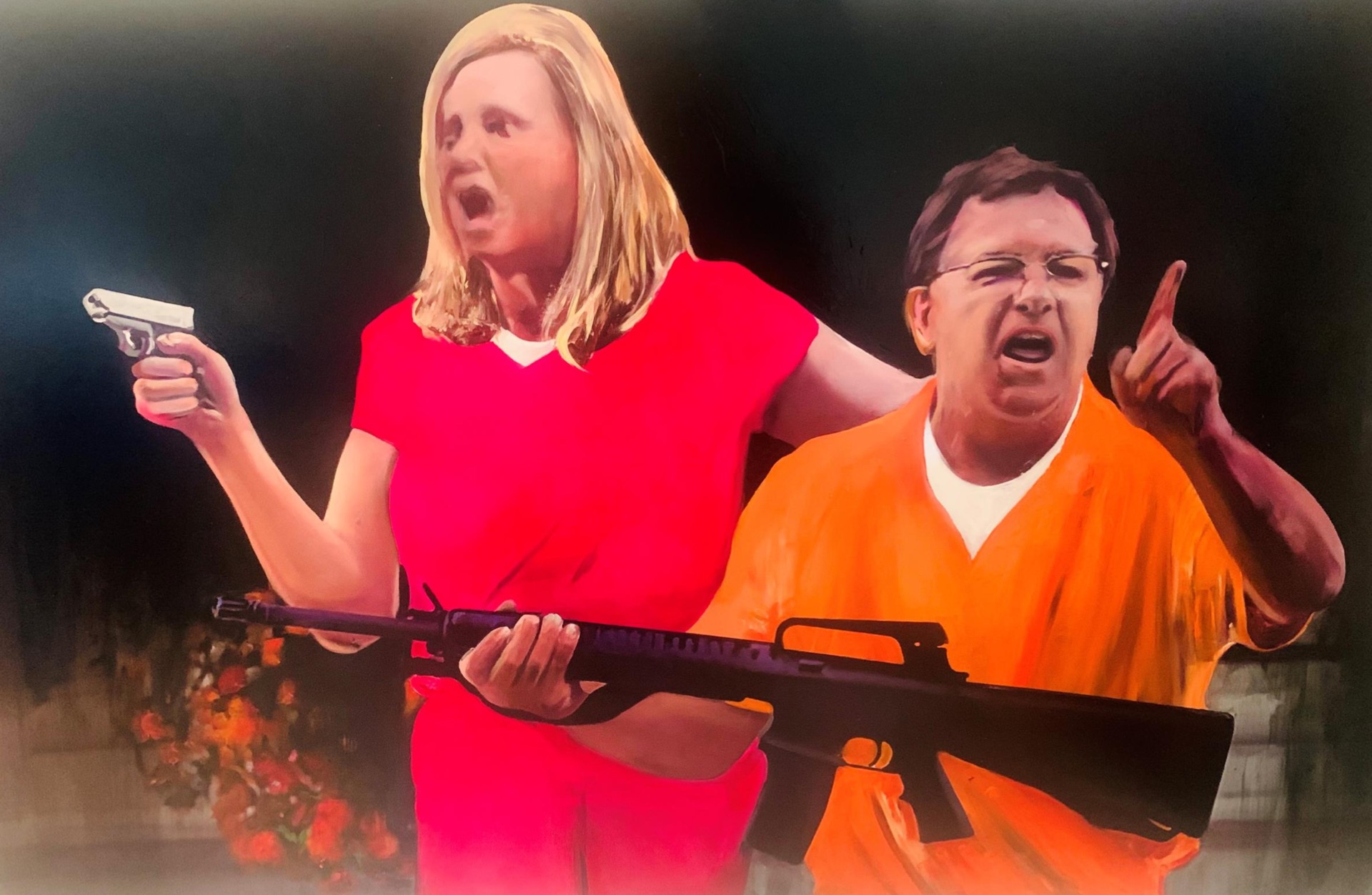 These “culprits” ironically are both attorneys. They are portrayed in colors reserved for the criminally insane and those who committed manslaughter. The St. Louis gun- toting controversy is an American incident during the George Floyd protests in Missouri which involved protesters trespassing in a private community that escalated into a standoff when demonstrators marched close to the home of Mark and Patricia McCloskey, both armed. The incident gained national news coverage and sparked controversy. Kimberly Gardner, circuit attorney for St. Louis, Missouri, filed charges against the McCloskey couple on July 20, 2020. This decision drew national attention. 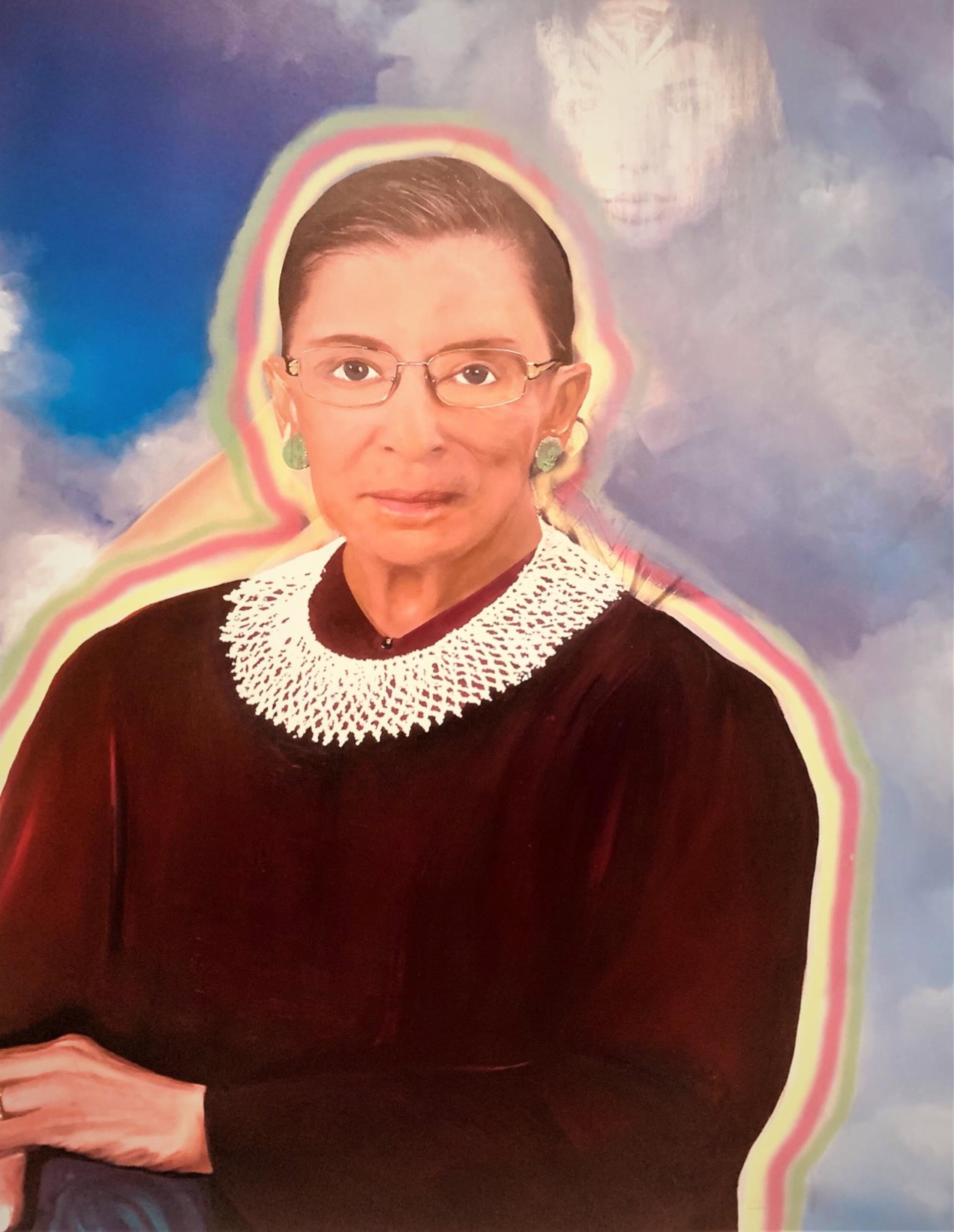 A virtual modern-day Wonder woman, Supreme Court Justice Ruth Bader Ginsburg died at age 87 in 2020 leaving many women feeling a sudden loss of a key inspiration and feminine voice of equality. She was an example of humility, genius and a true international champion for women, equal rights for all and the underdog fighting against political polarization. 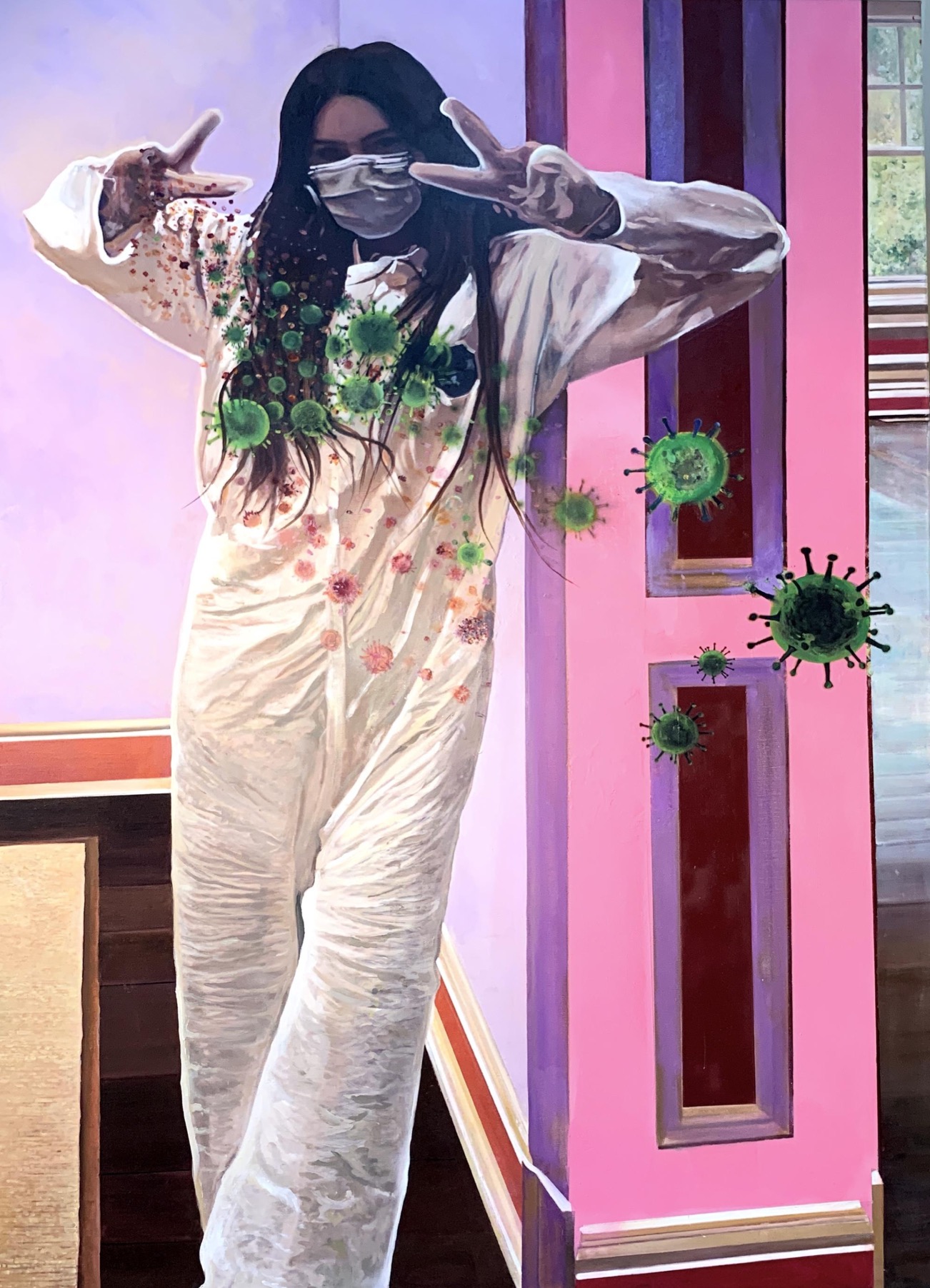 Posing as the Corona Fairy, Libbie created the vision to chronicle the maddening events in 2020 as they unfolded. She married into one of the New York art world's most famous and successful families - the Mugrabis - whose collection included 800 Warhol's, a myriad Renoirs, Monets and Hirsts – Libbie is very much reminiscent of a modern Peggy Guggenheim setting out to forge a path of her own, albeit this time, in London. 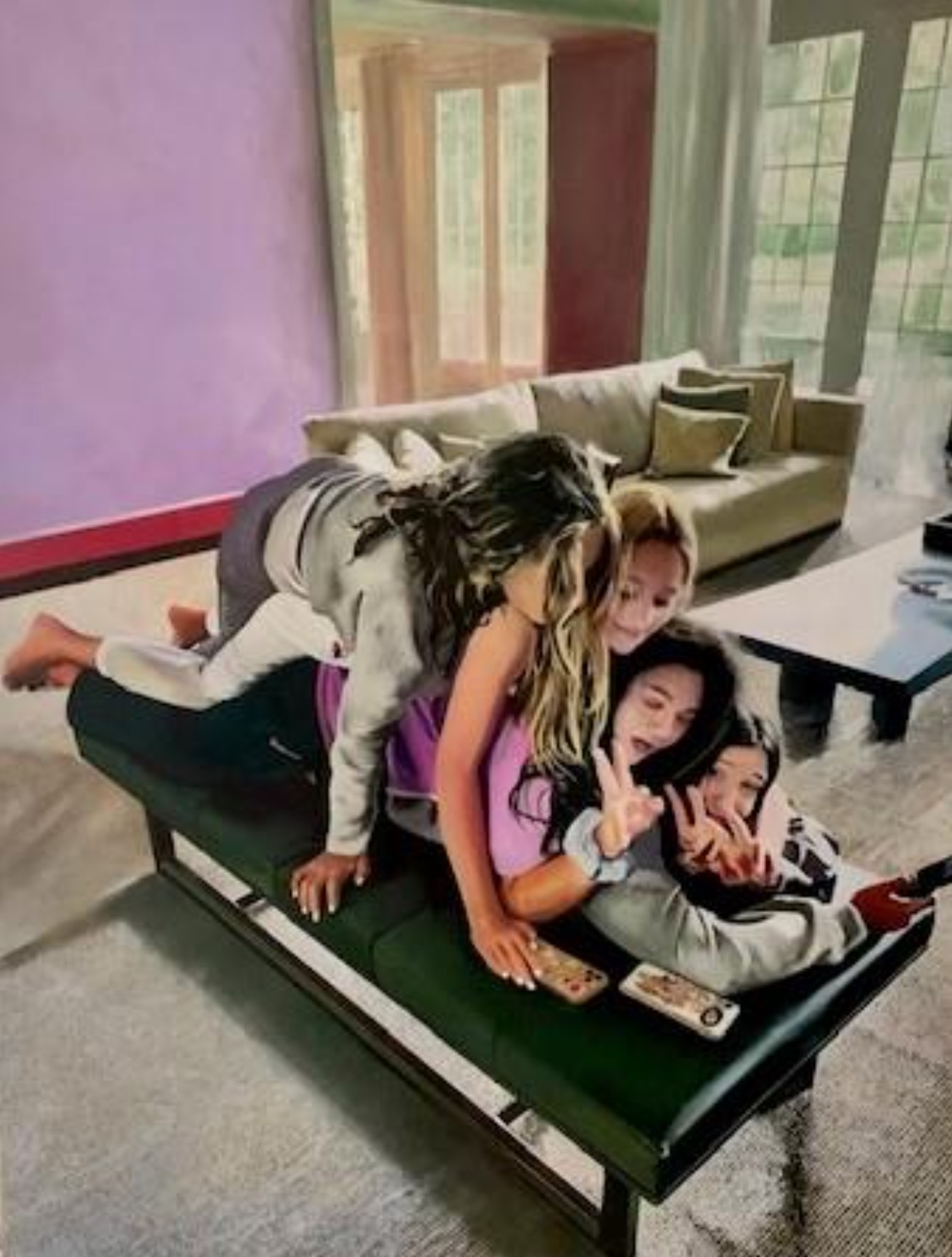 Capturing the carefree happiness of children playing reminds us that despite the oppressive environment in 2020 having fun did in fact still exist. This painting captures typical teenage girls doing what they do best - Libbie Mugrabi’s daughter being one of them. 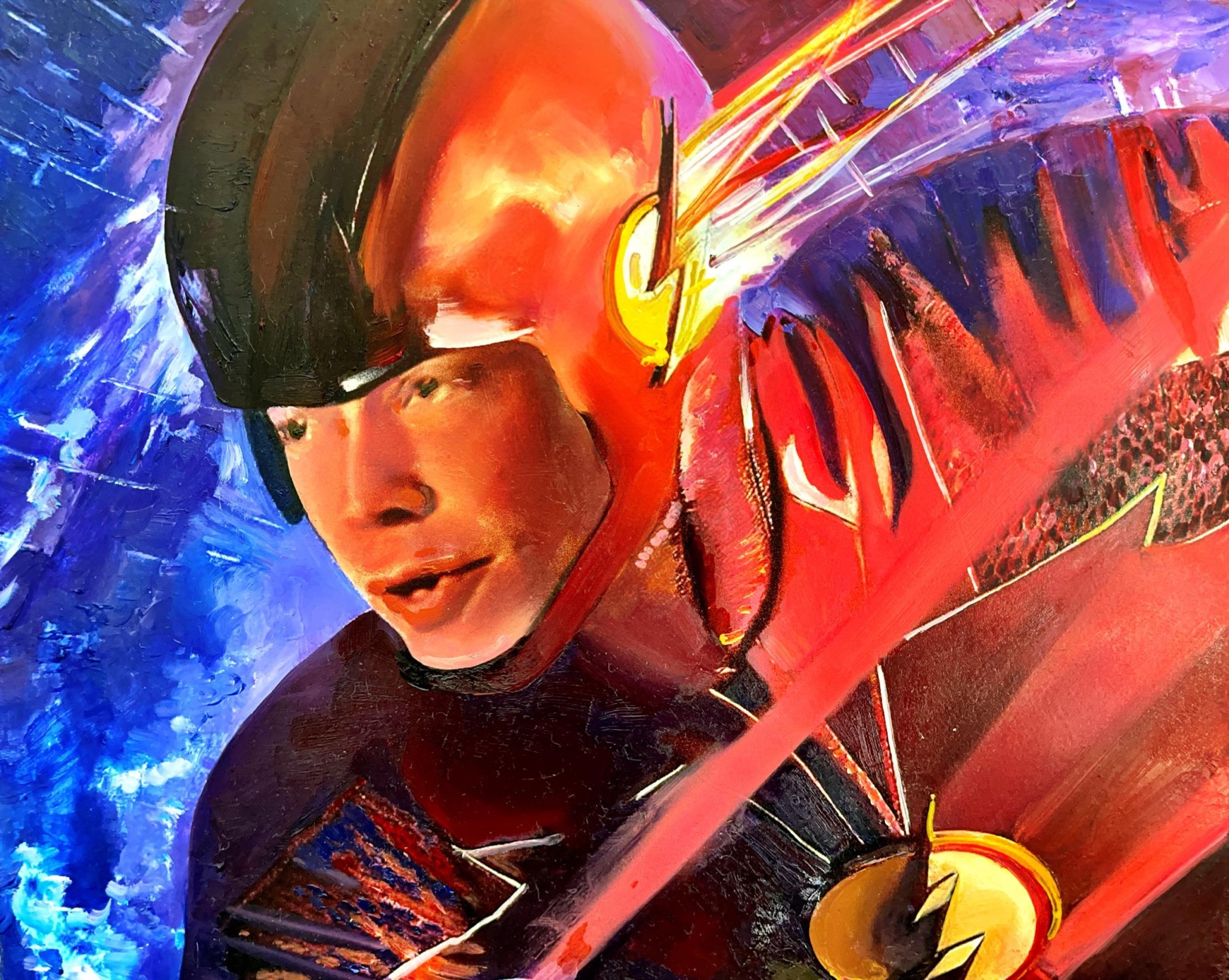 Pierce – a child actor turned video-game entrepreneur turned crypto titan – was listed number nine on Forbes’ first-ever List of Cryptocurrency’s Wealthiest People, with his net worth estimated as high as $1 billion. The madness continued in 2020 when the legendary Bitcoin “Superhero” made a run for the US presidency. Pierce was basing his campaign around the digitization of the distribution of stimulus checks granted to American citizens as a result of the CARES Act. 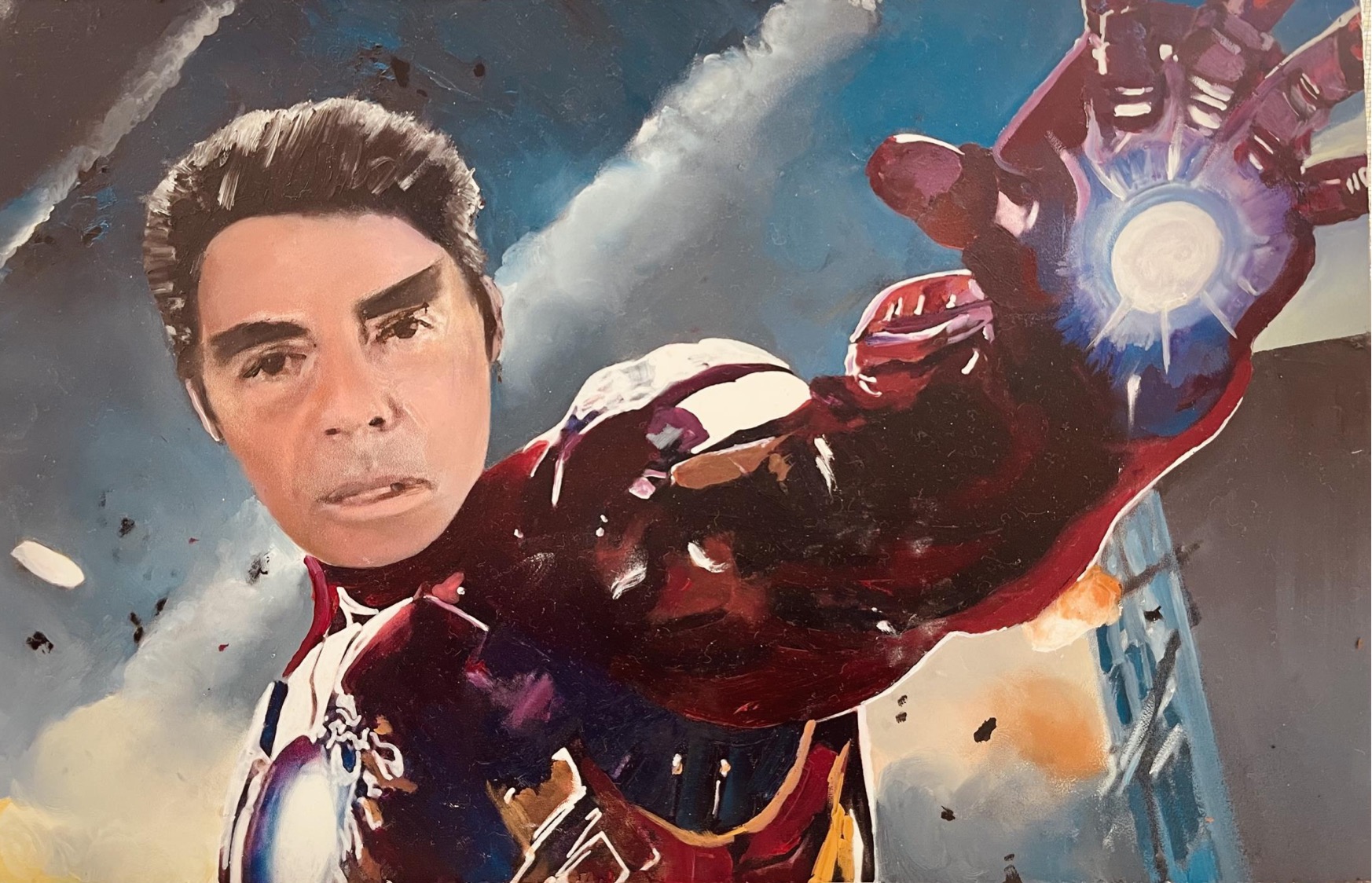 Timothy Draper always wanted to be a superhero and is another big supporter of cryptocurrency which was the rage in 2020. He’s an American billionaire venture capital investor, and founder of Draper Fisher Jurvetson (DFJ). He is portrayed here as Anthony Edward Stark, i.e., Tony Stark, the fictional character played by Robert Downey Jr. in the Marvel Cinematic Universe film franchise—based on the Marvel Comics character of the same name—commonly known by his alter ego, Iron Man. In the films, Stark is an industrialist, genius inventor, hero and former playboy who is CEO of Stark Industries. 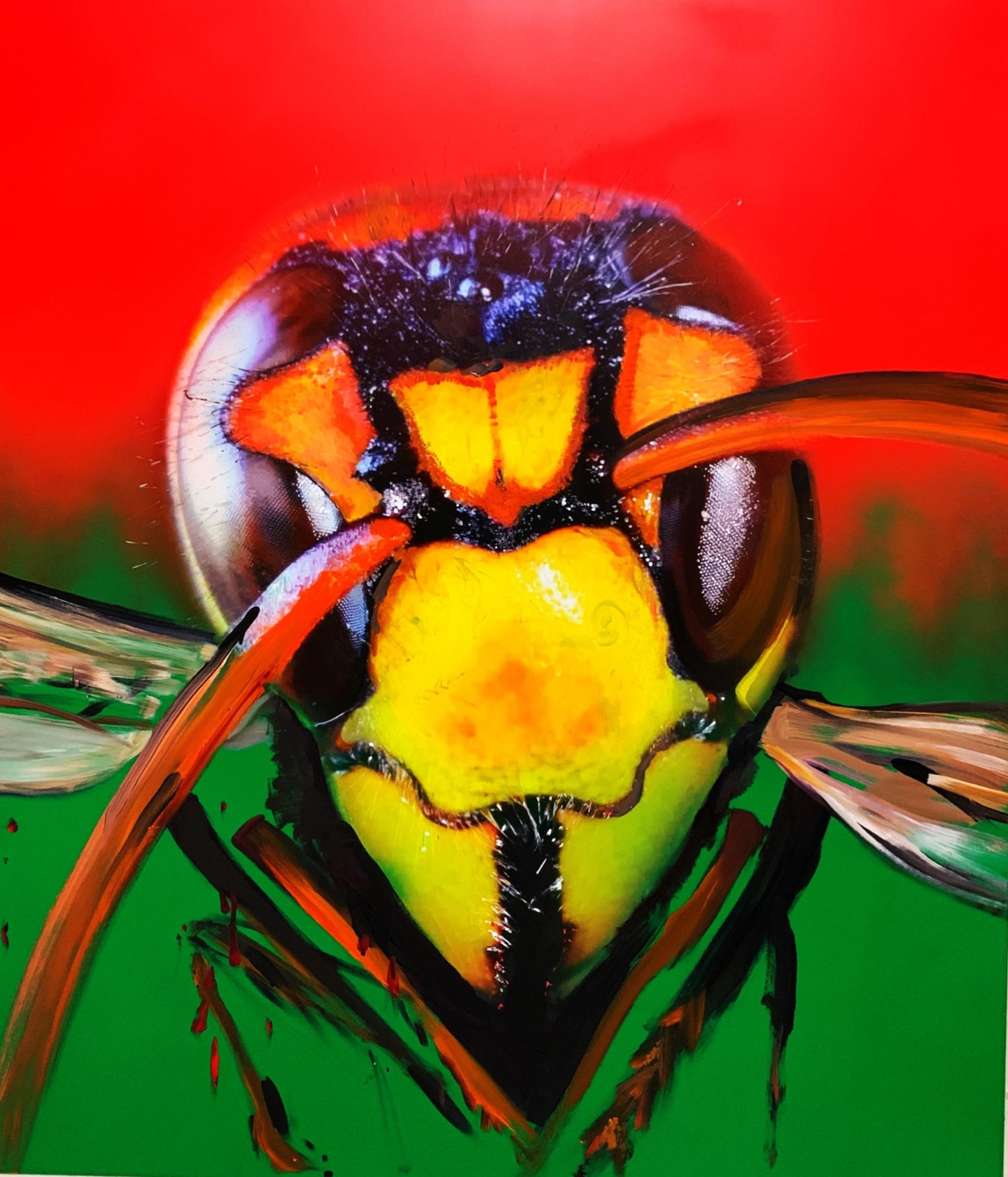 Just when you thought 2020 could not get any worse; enter giant hornets with freakish eyes and a venomous sting to add to the long list of worries. For the first time, Asian giant hornets were spotted in the United States, specifically in Washington State. Beekeepers reported piles of dead bees with their heads ripped off, an alarming sight in a country with a rapidly declining bee population. More than two inches long, the world's largest hornets offer a sting that can kill humans if stung multiple times. Hence, their nickname "murder hornets." 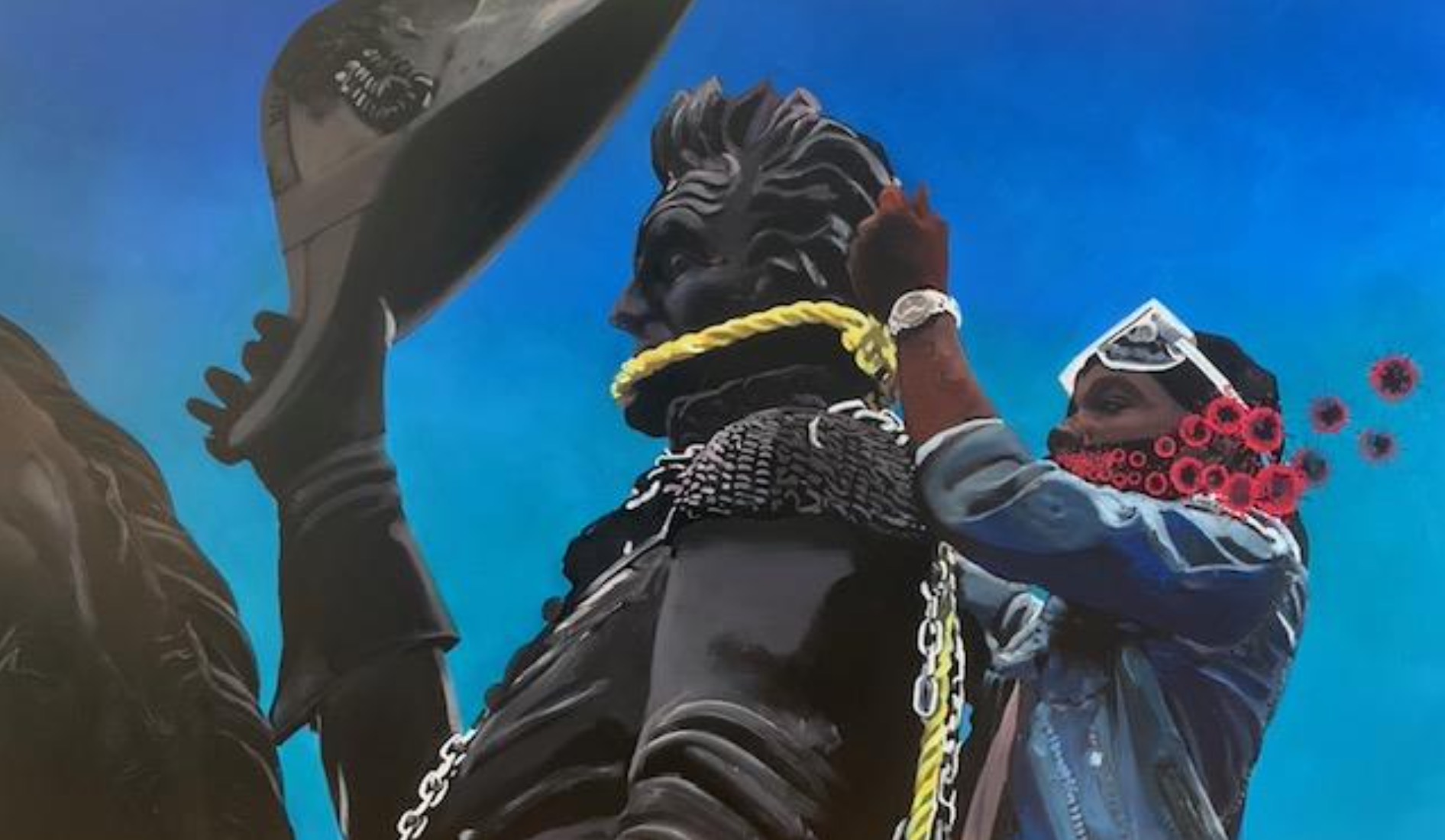 The irony of the Black Lives Matter movement in this painting is that the former President Andrew Jackson by today’s standards would be considered racist, as he believed tribal American Indians were inferior to Whites. Jackson also thought them to be like children and forced the indigenous peoples to move hundreds of miles westward for their own good, since they would never fit in with a White society. 15,000 members of the Cherokee tribe were made to walk from their homes in the Southern states to a designated territory in present-day Oklahoma in 1838. Many died along the way and this forced relocation became known as the “Trail of Tears” because of the great hardship faced by Cherokees. In brutal conditions, nearly 4,000 Cherokees died on the “Trail of Tears”. 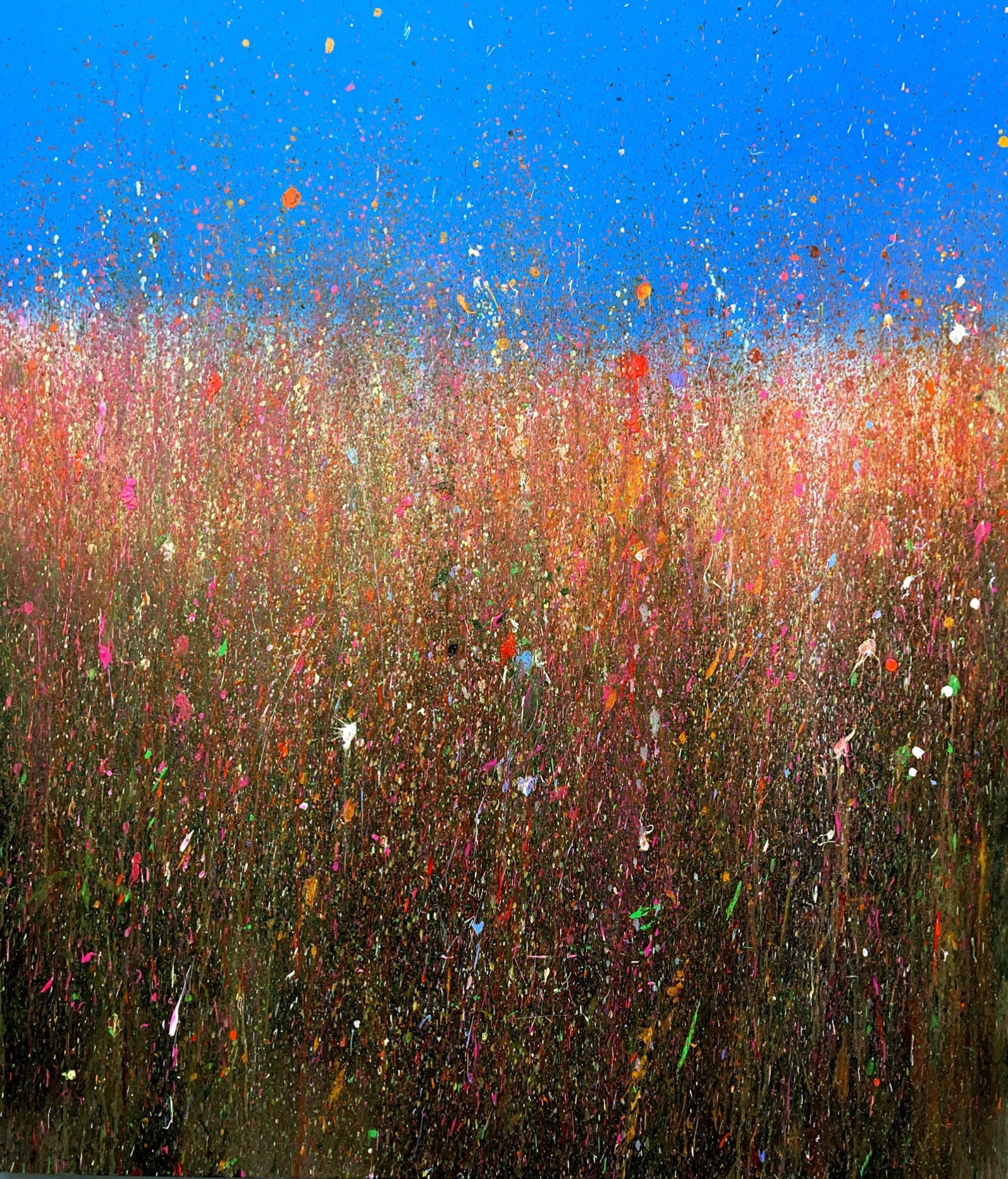 Society all over the world needed relief from living under the dark cloud from the pandemic and civil unrest. This painting evokes a sense of happiness, and joy, derived from its complimentary color and freeform paint creating the illusion of reality. 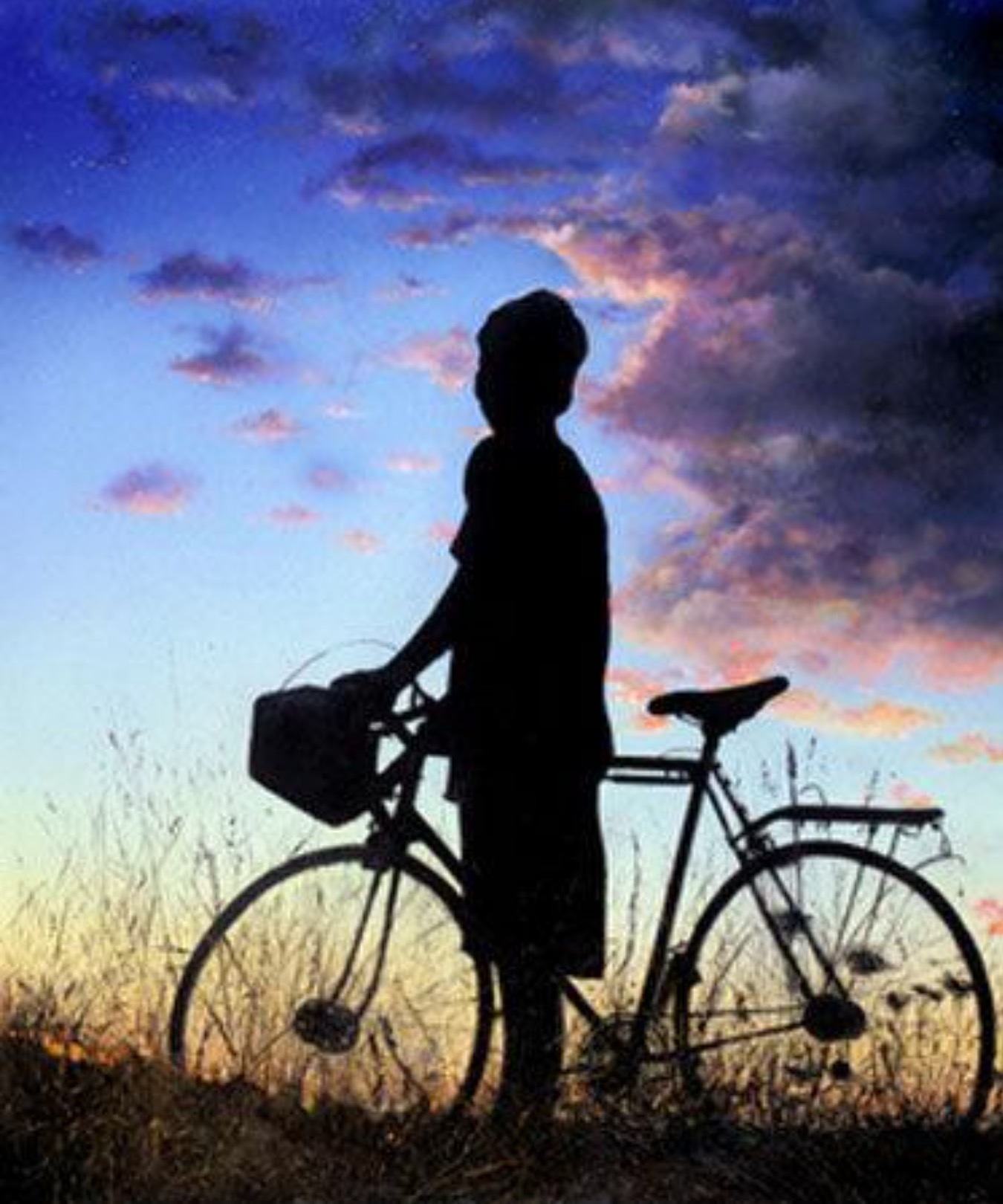 This painting of a silhouette of a boy on a bike symbolizes our youth and their thinking about their future and what lies on the horizon. All of us are deep inside children. 2020 witnessed an increase in children who have been left hungry, isolated, abused and anxious. The education of hundreds of millions of children has been disrupted. Access to protection services and health services – including routine vaccinations – has been severely impacted. The pandemic is also affecting young people’s mental health and pushing their families into poverty.